The landscape starts to change around mile marker 94. Traveling down to the Florida Keys from Miami in October, a month after Hurricane Irma, volunteers—nine of my fellow Panthers and myself, along with employees and execs from Wells Fargo, Bank of America and the Miami Chamber of Commerce—peer out bus windows as the devastation comes into focus. The relatively few piles of debris we saw earlier—mostly tree branches and insulation—give way to much larger ones that include mattresses, furniture and even refrigerators slung to the side of the road. A couple of motorboats sit in the swale of the Overseas Highway. Blue tarps appear on rooftops here and there. A gas station overhang bends crumpled like tin foil. The bottoms of sunken boats protrude from the water and glisten in the sun.

We arrive at the parking lot of Vineyard Community Church in Big Pine Key, the island on which the storm made landfall, and a Red Cross administrator ushers us to folding chairs inside. There Pastor Steve asks if anyone in our group of about 40 knows how to operate a chain saw. Two Wells Fargo guys raise their hands.

The church has been accepting donations of nonperishables for distribution to those in need and taking requests for help from local residents still digging out from the storm. Those who come forward to ask for free day labor—mostly unskilled, like what we will provide—appear to be the lucky ones: They believe their dwellings remain habitable or, at least, fixable. For many others, that is not the case.

An estimated 25 percent of homes in the Keys were destroyed by Hurricane Irma, and the majority of those constituted “workforce housing”—mainly older structures and trailers used to accommodate folks who staff the tourist industry, particularly in food service. Compounding woes for the worst-hit residents: Many also lost jobs as their places of employment closed for repairs.

A member of our Panther team is handed several forms with the addresses of individuals who have asked for help, and the papers become our marching orders. We head together to the house of Liz Laatsch. She evacuated before the storm with her daughter and 2-year-old grandson and returned to find their cars and the ground floor of their home destroyed by floodwaters she estimates rose six feet.

Laatsch, 55, downplays her own losses as she recognizes that others have it worse. “I’ve been very fortunate. I’ve been blessed. I have only lost things that are downstairs, some sentimental, some not,” she says. Nearby, a box holds a pair of children’s handprints, each one pressed into a plaster-of-Paris mold and dating back nearly 20 years. “My neighbors, coworkers and friends have lost everything,” she says. “They lost the house. They’ve lost the job.”

Laatsch also has lost her job—as a server/bartender at Little Palm Island Resort, likely shuttered until next year—but she figures she can find another one (the Keys remain open for business), and she stays positive. “I’m pretty optimistic,” she says, “especially with all the help I’ve been getting.”

From us, that help amounts to clearing felled trees, removing a damaged screen door and carrying away an old metal shed.

A street or two away, Donna Allison, 58, explains how she weathered the storm alone in her two-bedroom bungalow and now laments the loss of several trees (two of which lean against her roof) and a well-maintained garden. “It was beautiful, absolutely beautiful,” she says while showing off photos on her cell phone.

Again we volunteers start hauling trash. Again we witness the human spirit straining to rise above it all.

“I do got hope. It takes patience and time [but] I’m going do it,” Allison says of rebuilding her battered landscape. Of the hour or two of concentrated labor our team puts into her small plot of land, she says, “That did a world of good. Every little bit helps.”

Deciding that our next home—a moldy trailer just steps from the water—has taken too great a hit to ever come back to life, we do no work there but instead meet up with the other teams from our original group. It’s all hands on deck at a house where several families have come together in the wake of the disaster. A young woman of 23, Alexa Olivera, appears in charge despite bearing signs of trauma. Struggling to hold it together, she talks about the loss of her rental apartment and how she and a friend slept for two weeks on the roof rack of Olivera’s car before finally moving into a hotel room compliments of FEMA. Prior to the storm, Olivera sent away her toddler with relatives even as she stayed to ride out a hurricane that would take her clothes, her computer and her two dogs, a Pomeranian and a Chihuahua that eventually drowned. “We didn’t expect it to get that high. We didn’t think it was going to be that serious,” she says of disregarding mandatory evacuation orders. “We waited too long.”

With so many hands at work, debris at the property is quickly collected into a huge mountain. Emboldened by the visible progress, someone asks aloud if the five-foot-tall wire birdcage sitting in the front lawn can be thrown onto the pile. Olivera calls to a disabled man, the homeowner, sitting inside at a window. He balks at the suggestion of getting rid of the cage. “But it’s broken,” one of the volunteers insists. Having already lost plenty, the man contemplates the useless item with an importance that seems out of proportion. “It’s broken,” someone says again. The man thinks for another moment before relenting, and the once elegant enclosure is tossed on the trash heap. 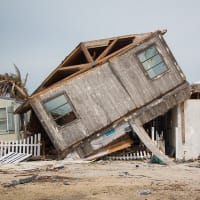 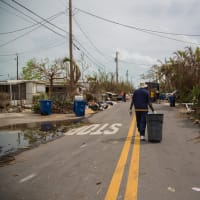 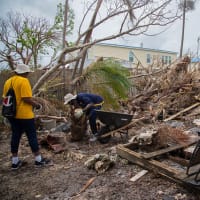 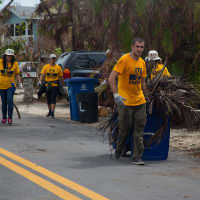 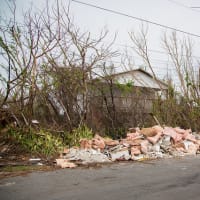 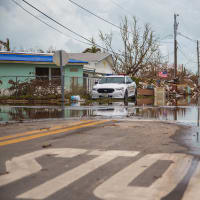