James Webb once built a two-person space capsule. It was wooden and complete with electrical switches. But that backyard engineering marvel ended when he blew all the fuses in his family’s garage as he tried to outfit it with a laser beam.

The future FIU astrophysicist decided to stick to stargazing.

It was also during this time he started to keep track of man’s quest for the moon — taking precision cuttings of the Anderson Daily Bulletin, his hometown Indiana newspaper. He captured the phases of Project Gemini, NASA’s second human spaceflight program that ended in 1966, about the same time Webb’s father stopped buying the newspaper. So too ended Webb’s scrapbooking. It didn’t stop his enthusiasm for Project Apollo, though.

When Neil Armstrong took the first step onto the moon’s surface July 20, 1969, 15-year-old Webb was watching. So was the rest of the world.

More than 4,000 miles away in Ertvelde, Belgium, 17-year-old Walter Van Hamme would normally be celebrating Belgium’s independence day. But on July 21 of 1969 — his attention was on his family’s black and white console television. Because of the 7-hour time difference between Belgium and NASA Mission Control in Houston, Texas, the moon landing occurred there on the 21st.

Wanting to freeze the moment, he grabbed his camera. He pointed it at the TV. With each step down the ladder, click. In rapid succession, Van Hamme captured Neil Armstrong’s nine-step journey from astronaut to visitor on a celestial body.

“There was a fine layer of dust on the moon and the issue was that no one knew how deep it was or whether the astronauts would get stuck in it, like quicksand,” Van Hamme said.

Captured in the black and white photos of his black and white TV, the astronauts were not swallowed by the surface. They safely landed and explored the moon for two hours.

Van Hamme kept the photos, but hasn't laid eyes on them for some time. He believes they are in a box in his sister's attic in Belgium.

Today, the FIU astrophysicist and senior associate dean in the College of Arts, Sciences & Education, notes his interest in astronomy began before the moon landing, but that moment was pivotal.

Her love affair with the stars began in the countryside near Milan, Italy. As a little girl, her grandmother would tell stories as they walked under the night sky. Stars that have eyes. Stars that dance. Stars that sing.

"That was it for me," Terenzi said. "It was the imagination. She triggered my fantasy, my imagination, my artistic side, and it led me to explore the beauty of science."

When she was 8, her parents woke her up in the wee hours of the morning on July 21 in Milan. They gathered around the television to watch the astronauts walk on the moon. From her balcony, she looked up at the moon, enchanted.

"There. A man is there. The moon," she remembers thinking.

It was a shared experience at the time for people young and old. For Terenzi, it also represented enlightenment, a driving force in her career. The FIU astrophysicist specializes in acoustic astronomy, or how sound reflects the physical, chemical and dynamic properties of celestial objects.

For FIU geologist Stephen Haggerty, acoustics don’t interest him as much as the metallic properties of rocks. The South African geologist was living in Washington, D.C. during the summer of 1969. He was 30 years old.

As a postdoctoral researcher at the Carnegie Institution for Science, he was part of a research team that would be among the first to study moon rocks if Apollo 11 was a success. On the day of the moon landing, Haggerty was in front of the television.

“It’s a memorable scene,” he recalls with a child-like grin.

But his mind was on the rocks.

“Here for the very first time, we had samples that were collected by man from another planetary body. That was very exciting,” Haggerty said. “I still get a tingle when I talk about it.”

It would be months before the Carnegie team would receive samples from the moon. Once in hand, Haggerty made geologic history. Within an hour of examining moon rocks under his microscope, the expert in magnetic and opaque rocks quickly recognized what he believed to be a new mineral. As it turns out, there was up to 30 percent of this mineral in the lunar samples that came back to Earth. Further studies confirmed Haggerty’s belief. He was given the honor of naming the lunar mineral.

He wanted to call the mineral Armalcolite. “Arm” for Neil Armstrong. “Al” for Buzz Aldrin. “Col” for Michael Collins. As a first step, Haggerty wrote to the three Apollo 11 astronauts seeking their permission. The trio penned a letter back to Haggerty granting their permission and expressing gratitude.

Collins, who was the Apollo 11 co-pilot and the one of the three who stayed behind in the command module during the moon walk, was now serving as U.S. assistant secretary of state. He sent a separate letter to Haggerty stating he was honored to be the “co” in Armalcolite. With that infectious child-like grin, Haggerty says Collins is actually the “col,” putting him on equal footing with the moonwalkers. 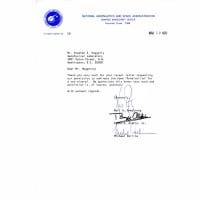 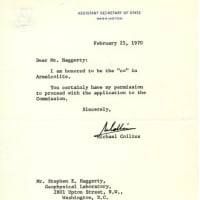 Haggerty hopes mankind will one day return to the moon. He hopes he’ll still be here to see it. 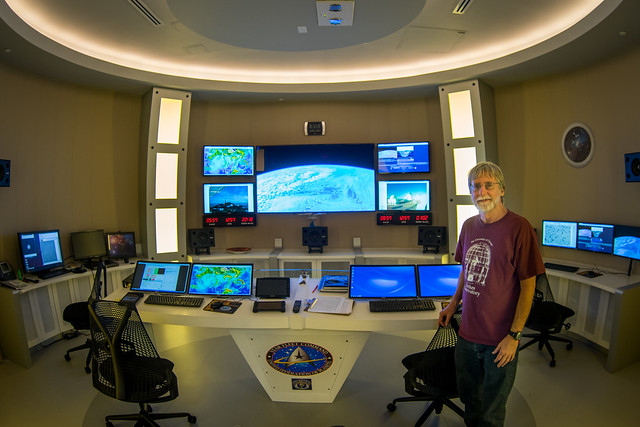