South Florida said goodbye to an icon on Thursday by celebrating a life of consequence.

Prayer, scripture readings, music, dance and heartfelt reminiscences filled the Ocean Bank Convocation Center as hundreds gathered to honor a man who made a difference.

Albert E. Dotson Sr. came into this world with no special privileges but rose to prominence on the abundant content of his character during an era when examples of successful individuals who looked like him were rare.

Through a combination of hard work, humility and humor and an uncanny ability to connect with people across a broad spectrum, he parlayed his extraordinary commitment into an outsized influence on the region and leaves behind a legacy that has won him love and respect from all corners.

“Al Dotson fostered in us the mindset to get things done, to move forward, to have impact and to never give up,” President Mark B. Rosenberg said to those assembled of Dotson's influence during a nearly 40-year association with the university.

“Al Dotson through deed and word lifted us up. He summoned our better angels. He enabled us to be our better selves. He did it with style, conviction, humility and love.”—Mark B. Rosenberg

Dotson joined the FIU Foundation Board of Directors in 1983 and served until 2001, when he became a founding member of the FIU Board of Trustees, on which he served with distinction for a decade, including as chair from 2009 to 2011.

Cuban-American businessman Leslie Pantín over the years worked with Dotson on behalf of FIU and several other institutions, and the two became lifelong friends. “It is very, very hard to highlight a few things about Al Dotson Sr. because there are so many,” he told mourners. Pantín spoke of their collaboration with legendary University of Miami football coach Howard Schnellenberger to lead Partners for Youth, a public initiative to bring new sports facilities to the inner-city in the 1980s following social unrest. Dotson attended Pantín's wedding and, later, as president of the Miami-Dade Youth Fair and Exposition, skipped Pantín's kids to the front of a ride line and told the attendant the Spanish-speaking children were his niece and nephew. “You should have seen the faces of the carnie workers,” Pantín said to laughter.

Born in 1938, Dotson was raised in segregated Memphis by a single mother and eventually moved to Detroit. There he completed high school and a year of university before dropping out to take an entry-level job at a Sears and, a few years later, marrying the love of his life.

With wife Earlene’s support and his unwavering diligence, Dotson worked his way up to become the first Black store manager in the history of Sears Roebuck & Company. That corporate confidence contrasted with the response of many a surprised customer who, upon Dotson’s arriving on the sales floor to resolve a question, often asked to deal instead with “the white manager.”

Undeterred, Dotson rode his position with the company to placements in Chicago, Atlanta and South Florida, where he arrived in 1976 to run the store at Westland Mall in Hialeah.

As he had elsewhere, Dotson got involved with numerous organizations, including the Greater Miami Chamber of Commerce, the Urban League of Greater Miami, the United Way, Baptist Health South Florida and others. Along the way, he racked up a long list as the first Black board member or chair of many, including as the president and chair of the famed Orange Bowl Committee.

But that elevation had nothing to do with diversity and everything to do with the quality of the man, said longtime friend Jack Seiler, the current president and chair of the Orange Bowl Committee and a former state representative and Fort Lauderdale mayor who traveled with Dotson to college football games and remains close with the Dotson family.

Seiler recalled Dotson distinguishing himself while working closely for years with like-minded committee volunteers who recognized his talent.

“And that to me is the real-life story of Al Dotson, not the fact that he might be the first Black leader. Regardless of his skin, he was just a great leader.”

By way of explaining his philosophy of life, Dotson sometimes quoted the Bible verse “To whom much is given, much is required.” But that line provided a cover for deflecting praise, Seiler explained: The self-made man, although blessed, never, ever was given anything but instead gave of himself.

“He earned everything he achieved, and he deserved every accolade and every recognition that he reluctantly accepted. It was never about him. It was always about others.”

“Somebody asked me to describe him, and I said this is a situation where someone who really leads a life of goodness achieved greatness.”—Jack Seiler

Much of Dotson’s greatness, Seiler added, emanated from a foundation built on family and faith. (At Sweet Home Missionary Baptist Church in Cutler Bay he was a deacon). Dotson’s five children attribute their own success to their parents, and son Al Dotson Jr. recalled the pair’s love and support as he spoke publicly about his dad. But, he added, Dotson the grandfather considered his 13 grandchildren the better versions of his own offspring, and they could do no wrong.

Mindful of having cut short his own education, Dotson ensured that his two sons and three daughters went the distance, after which he and Earlene felt ready to complete their own studies. That experience turned him into an ever-greater champion of higher education generally—he also served on boards at Florida Memorial and Barry universities—and informed his advocacy of FIU.

At the university, he played an integral role in the founding of the Herbert Wertheim College of Medicine and the College of Law and helped secure football and the campus stadium. He established the Dotson Family MLK Speaker Endowment, which supports the recruitment of renowned speakers for the university’s annual Rev. Dr. Martin Luther King Jr. breakfast. Dotson even coined the popular phrase “FIU: The Finest Institution in the Universe.”

A million-dollar planned gift from the Dotson children in honor of their parents is recognized on campus with the naming of the Earlene and Al Dotson Pavilion.

Dotson retired from Sears in 1986 after three decades and with his wife, degrees in hand, established a consulting firm and two concession stores at Miami International Airport, launching a second career as an entrepreneur.

A man more often described with nouns—groundbreaker, visionary, community builder, mentor, philanthropist, patriarch, friend—rather than with mere adjectives, Dotson creates a void with his passing but one that his purpose-driven life inspires others to fill.

Artrice Shepherd, recently the president of the Black Student Union, who graduates in August, is among those determined to carry Dotson’s legacy forward. As she embarks on a new career in communications and public relations, Shepherd takes with her lessons bestowed by a man she calls a legend.

“He was just somebody that you wanted to learn from, at every chance, every opportunity that you got,” Shepherd said. He once counseled her “to be courageous in the way that you decide to lead, however you decide to lead.” She takes that advice in the context of Dotson’s own example of dignity and integrity.

“If I’m going to call myself a servant-leader, I have to honor him. I have to show up in the best way possible for him and for his family because they left an impression on me and just an impact that I’ll always hold true to,” she said, “and try to make him proud in every single way possible.” 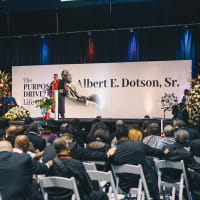 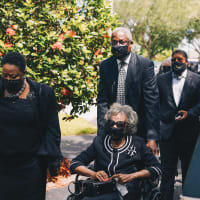 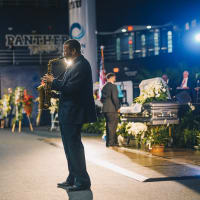 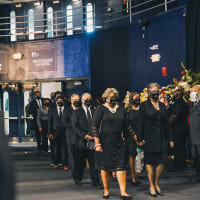 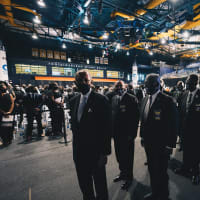 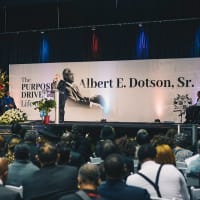 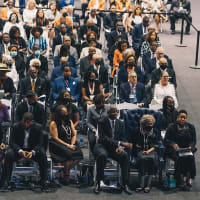 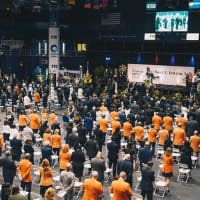