As it turns out, poop can tell you a lot about a shark’s diet.

Traditional methods to determine the diet of a shark aren’t very pleasant. With a living shark, its stomach can be partially pulled out through its mouth for a quick visual examination — which is mostly done on younger, smaller shark. But, even then, this doesn’t always work and sometimes the stomach is empty. It also doesn’t reveal all the species of prey that were eaten.

Scientists in the FIU Institute of Environment have developed a new, minimally invasive way to reveal exactly what a shark has eaten. All that’s needed is a quick poop swab from, well, you know where.

FIU postdoctoral scientist Judith Bakker and Ph.D. candidate Maurits van Zinnicq Bergmann use a cotton swab to collect poop from a shark’s cloaca (yes, which is what you think it is). DNA in the sample is analyzed to pinpoint the species a shark ate — critical information that can be used to inform conservation and management decisions.

DNA analysis of poop is commonly used for land animals, because scientists can follow a lion or elephant, then simply pick up the poop from the ground. That task is a lot more difficult, if not impossible, with sharks.

So, instead of trying to collect shark poop from the water, which may also be contaminated with DNA in the seawater from other species, Bakker and van Zinnicq Bergmann wanted to see if a sample straight from the source would work. They did a controlled feeding experiment with baby lemon sharks to try out their idea and test if what went in was what came out — and could be detected in the DNA samples.

Bakker — who has worked extensively with environmental DNA or eDNA — and van Zinnicq Bergmann were confident the method would work. But, they weren’t sure sharks pooped enough or even if anything was actually left behind in the cloaca that could be picked up by a swab.

“When the first results came back, I was like ‘wow!’ and really was amazed by how well it actually worked,” Bakker said.

Then, they tried it out with sharks in the wild. Bradley Strickland — who recently received his Ph.D. from FIU — was conducting tracking studies with juvenile bull sharks in the Everglades. Bakker and van Zinnicq Bergmann worked with him to gather swabs from 21 sharks. 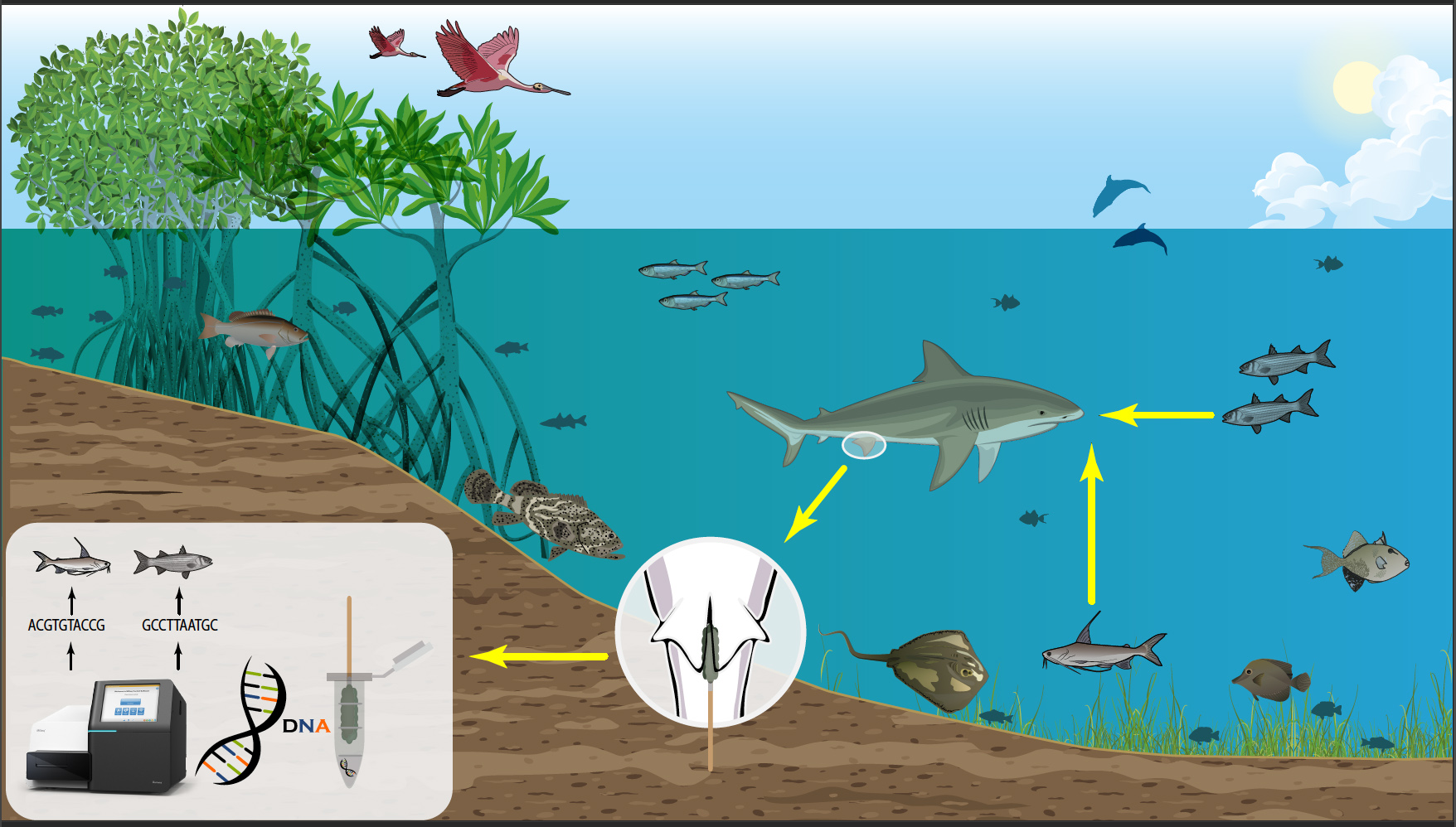 “What we were expecting to see, we saw for the most part,” Bakker said. “They eat a lot of catfish, but there were a few sharks that were eating other marine species, like rays, which means most likely they were moving around and eating in different locations of the Everglades.”

Diet is a key that unlocks a lot of critical information about how an animal is connected to its habitat — how and why they use a certain area, where they go, and their overall interactions within a particular food web. If one species disappears or its population is drastically reduced, that loss will be felt throughout the rest of the food web. The more data scientists have, the more information they have to drive conservation and management decisions.

“Changes in the food web have huge implications for ecosystem structure and function, and this information is especially important for fisheries management, because it’s used to create predictive models focused on the effects of fishing for certain species,” said van Zinnicq Bergmann. “These more data we have on diet, the more accurate these models can be — and the more accurate the predictions will be.”

Bakker and van Zinnicq Bergmann say their method can be easily combined with other research projects, like tracking studies, to paint a fuller picture of how sharks use their environment. The researchers also point out that the method has wider applications and can be used not just with sharks, but other species like fish, reptiles and, even, birds.

The research received funding and support from the Paul G. Allen Family Foundation and the Shark Conservation Fund. The findings were published in Molecular Ecology Resources.

FIU is ranked No. 9 in the world for positive impact on life below water by The Times Higher Education Impact Rankings. The university ranked third in the United States.