Over the course of four decades, Florida International University’s department of theatre has told countless stories on its stages. But it’s the real-life love stories that have been lived in the hallways, classrooms and production shops of the Wertheim Performing Arts Center that prove to be some of the most enduring stories told.

Although theatre has one of the university’s smallest departments on campus, an extraordinary number of its alumni have met their soul mates there. In the last 20 years alone, at least 15 married or engaged couples forged their bonds at FIU Theatre.

As a collaborative art, theatre relies on groups of artists working tirelessly and very closely together for months on end to make a two-hour play seem effortless. Anyone who has worked in the theatre knows that the kind of camaraderie necessary to create live theatre results in many strong friendships being formed. It is not uncommon to hear casts and theatre companies refer to themselves as "family." Sometimes those metaphorical families actually become real ones.

Not every love story in the theatre enjoys a happy ending – far from it. But what follows are just a few of the love stories that blossomed at FIU Theatre and made it to their fairy-tale ending.

Sometimes life has a way of imitating art. Allyn Moriyon and Sofia Sassone were cast in a production of An Ideal Husband in 2014. Somewhere during the rehearsal process, the line between pretend and reality began to blur.

“The scene in which Mabel and Goring confess their love for each other was some of the best acting we’ve ever done because we were actually falling in love – and have been ever since,” says Sassone.

The two moved to San Diego together shortly after graduation so Moriyon could pursue his MFA at the University of California, San Diego. The two are now engaged to be married.

For Patricia and Alex Machado, their bond was formed off-stage while working together on House of Spirits. Patricia was working her first big show as stage manager, a high-pressure and exhausting responsibility. Fortunately, Alex was assigned as her assistant stage manager and proved to be reliable and trustworthy.

The real sparks however came after hours. “I’ll never forget how much we used to talk for hours in the parking lot after rehearsal, just getting to know each other,” recalls Patricia.

Their professor and the show’s director, Michael Yawney, noticed the chemistry before they did. When he pointed it out to her, she thought that was ridiculous. They were just friends after all.

“Turns out, he called it,” says Patricia.

For many of the future couples, their time in the theatre department at FIU created strong partnerships that transcended the traditional building of a life together and saw them building careers together.

“The great thing about meeting at FIU was that it set a precedent for the rest of our relationship as both creative partners and life partners,” says Michael Leon.

Leon met his future wife Ashley Alvarez while they were students immersed in creating theatre and arguing about their favorite actors. As their relationship strengthened beyond their college careers, their professional bond grew as well.

When Leon wrote his first play, Alvarez was his partner through the play development process. When that play, The Cubans, was produced last year at Miami New Drama, Alvarez played the lead role. They’ve since collaborated on a short film, Crabs in a Barrel, which just finished filming late last year and is now in post-production.

Charles Sothers and Ana Andreu have been married for 14 years and for 17 years have been managing the nonprofit Roxy Theatre Group together.

Their love didn’t develop while they were students, though. Sothers remembers the moment he met Andreu. They were in the costume shop during the fall semester of 2000.

“I complimented something she was wearing,” recalls Sothers. His smooth move didn’t work.

“I gave him a strange look because why was a guy telling me that my turtleneck sleeveless sweater ‘looked good,’” added Andreu.

Fortunately, the awkward first meeting was not a sign of things to come. They became great friends during their time as students, and it was after graduation and working together that they realized they were more than just friends.

Ozzie and Nicky Quintana met through mutual friends before they both found themselves as theatre majors in an Introduction to Lighting and Scenic Design class at FIU.

“The road to each other was not a straight path,” says Nicky Quintana. “There were some twists and turns.”

During a weekend getaway with friends during the summer of 1999, they found themselves confessing their feelings for each other. Now, after 20 years of marriage, they have become the power couple of South Florida high school theatre, working together as theatre instructors at Miami Arts Studio. They’re also the parents of two teenage boys who are pursuing theatre careers of their own.

“FIU Theatre was the flame that sparked the extraordinary journey of our lives,” says Quintana.

“We were both double majors and shared one major: theatre,” says Lilly Pino. “We even starred in a play where we played lovers.”

Danny and Lilly currently live in Los Angeles with their two children, Luca and Julian, and their dog Prado.

BJ Duncan remembers having a crush on his future wife, Amy, during their first semester at FIU Theatre. But it took him a year and a half to make his move.

“We were both in Balm in Gilead and found ourselves spending more and more time around each other,” says Duncan, who now works as the Building Operations Coordinator for FIU’s College of Communication, Architecture + The Arts. “We both really hit it off and enjoyed being around one another, making each other laugh.”

He asked her out on the last day of the show, Easter Sunday 2006. They’ve been together ever since and got married in 2019.

For Juan Espinosa, it was love at first sight when he met Mabel Mir during their first semester at FIU. Mabel, however, needed some time to get there.

“I was in the friend zone for a solid three years,” says Espinosa. “But I was relentless in the chase, and never gave up hope.”

His chance came on the last day of a student production of Proof. He recalls one sentence after they were done striking the set for the show that would change both of their lives forever.

“Mabel came up to me and with a sneaky, shy grin asked, ‘Would it be weird if we kissed?’ My mind raced with many thoughts, but all I got out was an eager, 'No, not weird at all. Let’s do it.'"

Turns out, he was right. The kiss wasn’t weird and was the first of many to come. 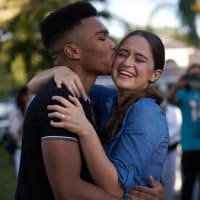 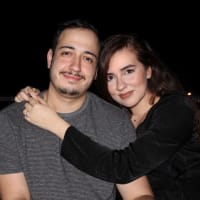 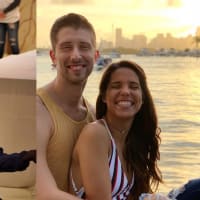 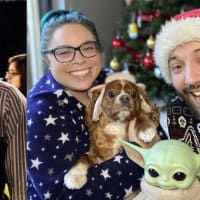 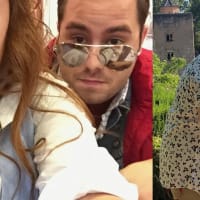 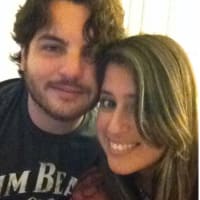 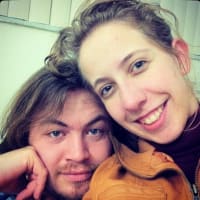 These are just a few of the real-life love stories that have been lived in the theatre department. To read more from these and the other six married and engaged couples pictured in the gallery above (click on individual images to see more "then and now" pairings), visit the FIU Theatre Facebook page where you can find their love stories, told in their own words.