Did you know that FIU’s campus used to be an abandoned airfield or had the largest opening enrollment in U.S. collegiate history with 5,667 students?

These fun facts and more are found in FIU’s 50th anniversary exhibition that takes the campus community back to the university’s early years.

The exhibition on the second floor of the Green Library at the Modesto Maidique Campus features FIU artifacts, including a model of the Primera Casa building and a hard hat that Charles Perry, FIU’s founding president, wore during the groundbreaking ceremony.

Vicki Silvera, the exhibition curator and university archivist for the past 35 years, aimed to tell the story of FIU, which started on an abandoned airfield in the heart of Sweetwater.

“There is no sign on campus today, with the exception of the “ivory tower,” that campus was once an airport,” said Silvera. “More than anything else, I wanted to acknowledge the people who started the whole idea of a university that is dedicated to the concept of international and how we continue it that way.”

Luria Costa, a senior studying digital media and communication, was surprised when she learned about FIU’s origins from the exhibit.

“It is so interesting to me how our campus was built on an airport field,” said Costa. “I think you have to know the history of your campus so you can tell other people who may not know what FIU is.” 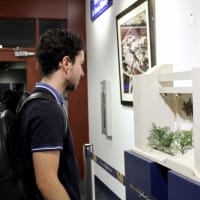 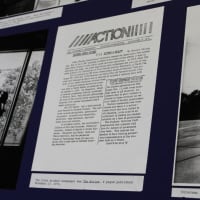 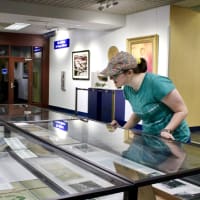 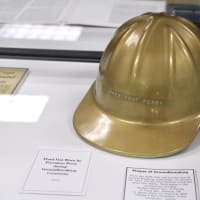 Before 1972, the only standing building on the airfield that became campus was an old airport control tower – which still stands between Student Health and the Green School buildings – that served as offices for FIU’s founders.

Perry wanted to keep it as a reminder of the tenacity and determination it took to transform the empty airfield into FIU, which is now one of the largest and most diverse state universities in the country.

“It reflected the absolute, very beginning of the institution – how it started and where it started,” said Perry in “Beyond the Tower,” a book on FIU’s history.

Martín Rago, a senior studying criminal justice, argued that celebrating the university’s history might even encourage students to improve academically.

“Because you're proud to be a part of FIU, you want to represent it well, in whatever you do, be it academically, in an organization or in sports. You want to do well for FIU,” said Rago. “Part of that is celebrating its history and knowing its beginnings, where it started and how much it has grown.”

Silvera highlighted that FIU has kept archives from the very beginning, thanks to Perry, who personally tagged documents to send to archives and donated his personal collection to the university before his death. “Even in the planning documents, if you look at his material from before the university, there was always a note that said ‘send to archives,’” said Silvera. “It’s interesting that he saw the importance of the archive.”

Presidential materials are shown alongside student work, such as the first print edition of the FIU student newspaper and photos from a fall festival and the first play, which was “The Night Thoreau Spent in Jail,” entirely produced and directed by students.

“This anniversary is the most important so far, so I wanted to concentrate on the beginning of the university,” said Silvera. “I always like for the incoming freshmen to walk into a gallery of something interesting.”