In the last decade, there has been an expectation that increasing amounts of complex data be delivered faster ― and at higher quality ― through the use of revolutionary antenna systems.

To expedite the process, the National Science Foundation (NSF) has awarded a $365,000 grant to FIU’s Department of Electrical and Computer Engineering. Professor Stavros Georgakopoulos, director of the Transforming Antennas Center and the RF Communications, mm-Waves and Terahertz Lab, is the principal investigator of the study, “Novel mm-Wave Reflectarray Antennas for Next-Generation Communications Systems.”

The work will impact numerous industries, from space missions to telecommunications to medicine, Georgakopoulos says. The new approach has the potential to transform antenna designs for satellites and communications systems, making them more versatile and less expensive to produce, all while increasing data transmission speed.

“Think about the resolution of our TVs 30 years ago and compare it to what we have today,” Georgakopoulos says. “This is the type of change we are talking about.” 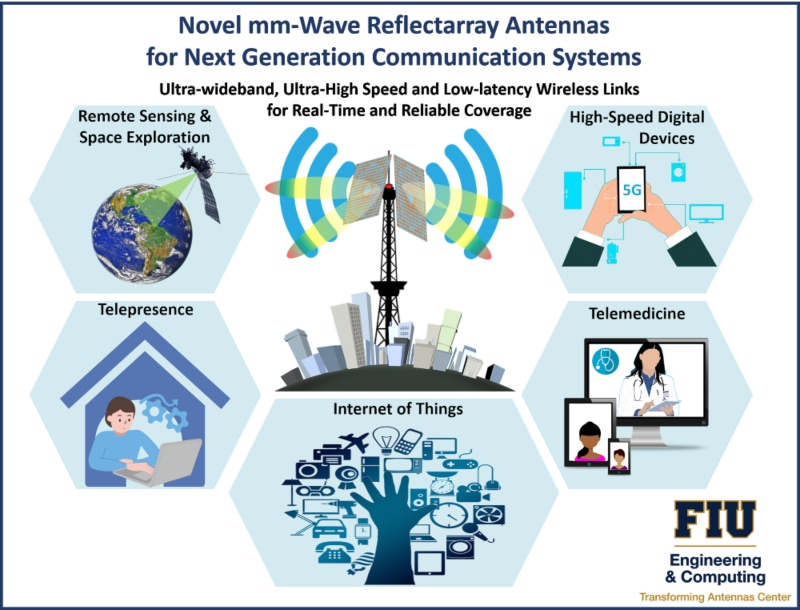 Georgakopoulos and his researchers are continuing their work to develop novel reflectarray antennas with new capabilities. “Currently most reflectarray antennas are passive, pointing in one direction,” he says. “We are working on steerable antennas. We have a narrow band, we want an ultrawide band. All of this helps us optimize the quality of the link, and if you want high-speed digital devices and sensors, you need these antennas.”

Georgakopoulos has a degree in electrical engineering from the University of Patras, Patras, Greece, and a master’s and Ph.D. in electrical engineering from Arizona State University in Tempe. He joined FIU in 2007, where he and his lab team have been developing a variety of antennas, including origami electromagnetic systems that are more compact and easier to deploy. Under his leadership, FIU has received numerous research grants from the military, government and private sectors.

“It’s very gratifying to receive support like this from the National Science Foundation,” he says. “They recognize the work we have already done and the potential our research has on a global scale to improve society. This is an industry that is rapidly evolving, and we are excited to play a part in its evolution.”