At FIU, a rock star crew of first-year students is starting its Panther journey.

“This freshman class has a resilience that we probably haven’t seen before,” says Assistant Vice President of Enrollment and University Admissions Jody Glassman. “They spent the last part of their junior year and their entire senior year in what we’ve called unprecedented times. This group is not only academically talented but also has a remarkable sense of self-motivation.”

This January, FIU will welcome nearly 900 students for their first semester. They have an average high school GPA of approximately 3.65.

The Class of 2025 has numerous standout students, including:

First-year students are gaining a stellar reputation for how they have embraced the university experience. In celebration of the start of the spring semester, here are some of these Panthers’ stories from their first semester—along with their “Blue and Goals” for 2022.

Blooming where she is planted 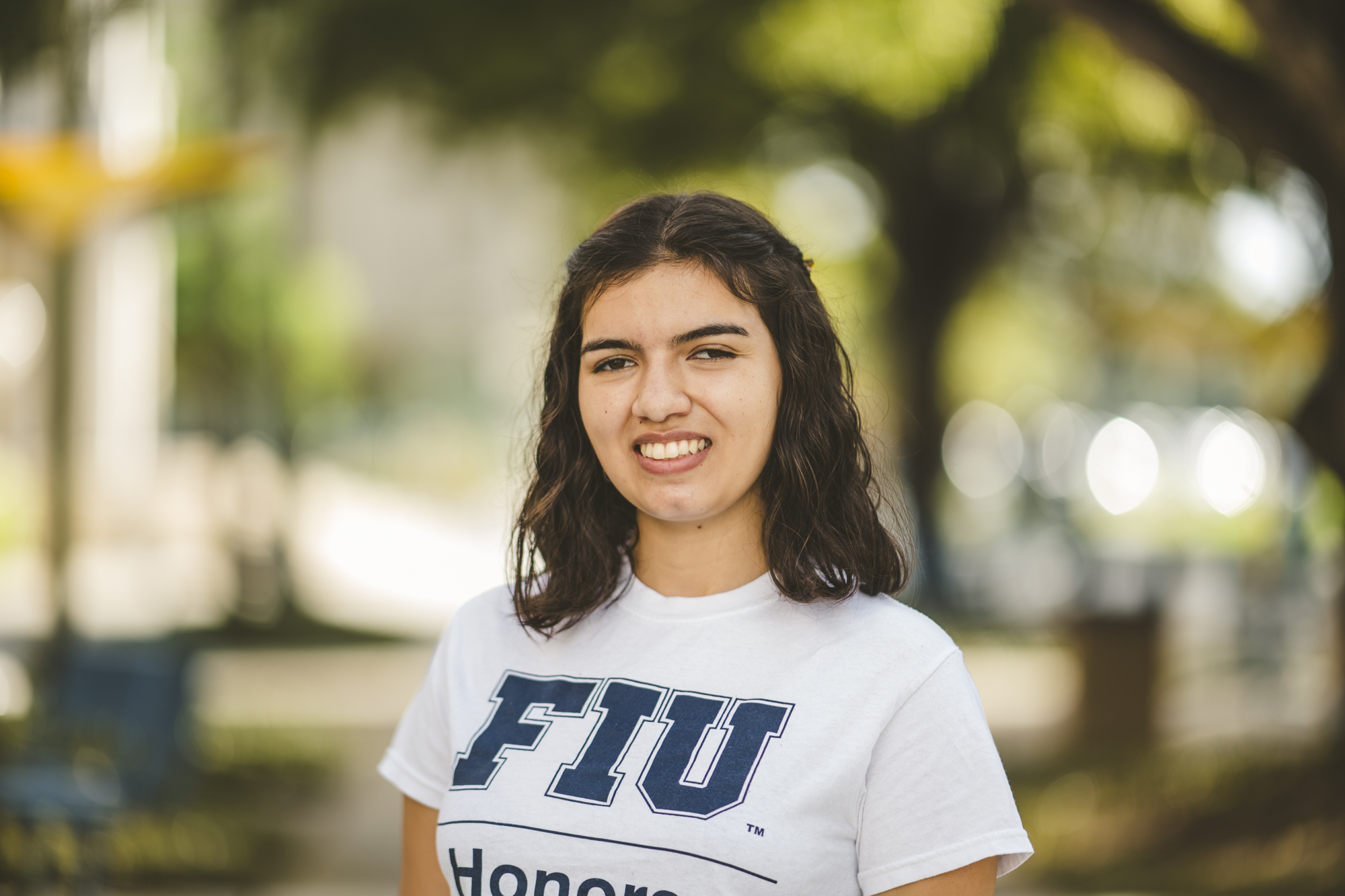 When first-year student Melanie Frolich applied to universities with an AA under her arm, she wanted to dive right into a great biochemistry program. She found FIU.

Now in her second semester, Melanie is thriving at the university. She is enjoying making connections with mentors, soaking up knowledge in class and gaining friends within FIU’s diverse and active student body.

Last semester, Frolich scored an A in Organic Chemistry II—a notoriously difficult class. She also became involved in FIU’s Garden Club. With this group, she has ventured to the Everglades and learned how she might set up her dream garden one day.

Her Blue and Goals: “I’d like to be able to make more connections with people who have the same passions as me,” she says. “And I’d like to continue to feel inspired about biochemistry and about living things in general, which is a true passion of mine.” 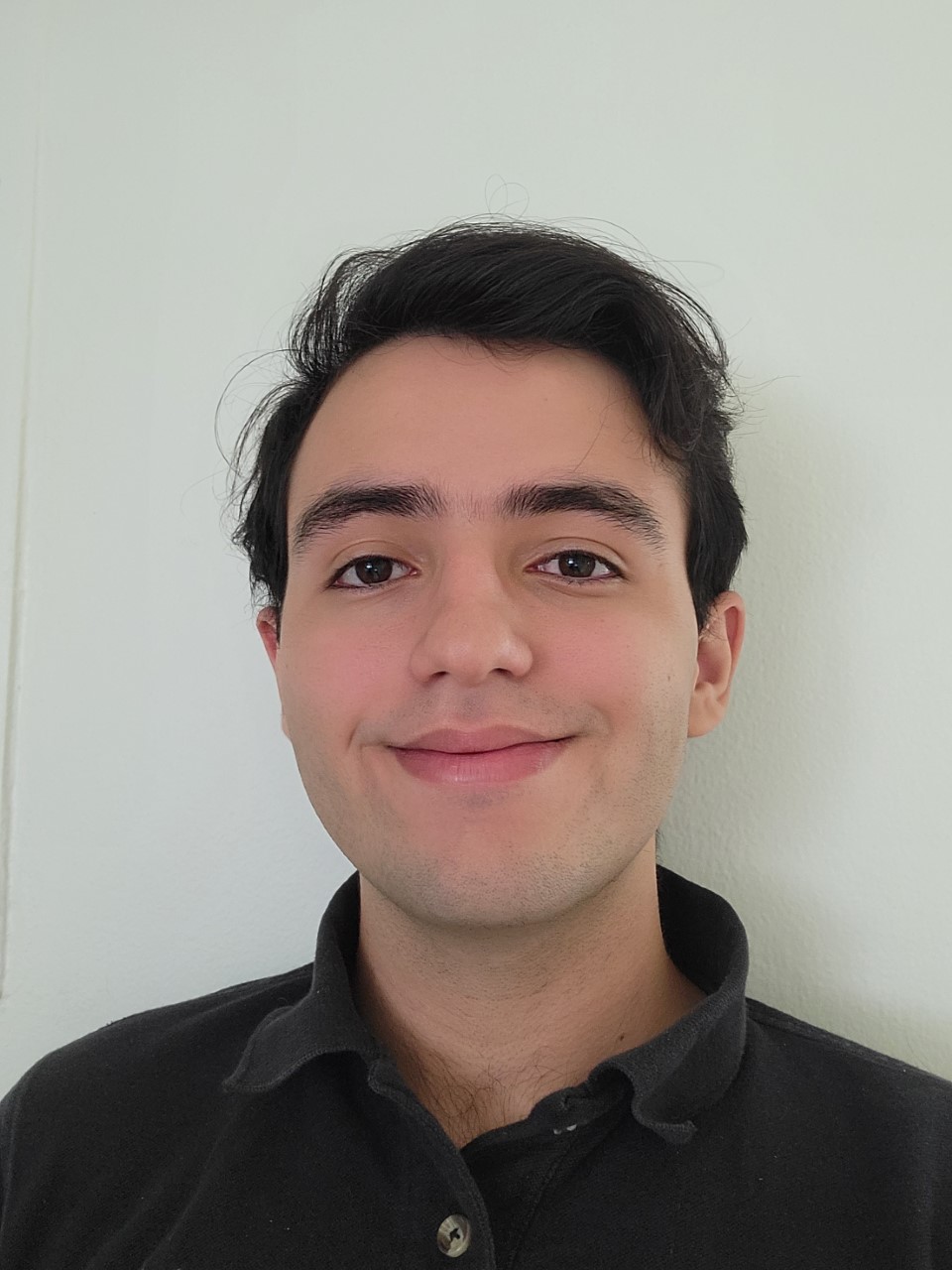 Jonathan Balila has been around computers all of his life. The son of an FIU alumnus who majored in electrical engineering, Balila has a passion for tech and complex video games that allow him to sharpen and refine his technical skills. Now at FIU, he is taking his talents to the next level.

Balila is a first-year information technology major on an academic scholarship at the Honors College. A native of Miami and a National Merit Finalist, he enjoys staying close to his family while living on campus and feasting on teriyaki chicken from Panda Express.

Last semester, Balila joined UPE, the university's largest student organization for technology. It’s a group that he credits for “staying away from the age-old stereotype of the hacker person in their own little room,” he says. He looks forward to getting more involved in the years ahead.

His Blue and Goals: “I would like to get better at acquiring skills. I feel that with the Honors College specifically, there’s a lot of courses where it’s not as straightforward as, ‘Oh, what’s 2 + 2?’ There’s a lot of assignments where you have to consider why something is true as opposed to being told it. And I really appreciate that.”

A dream to run an athletic department 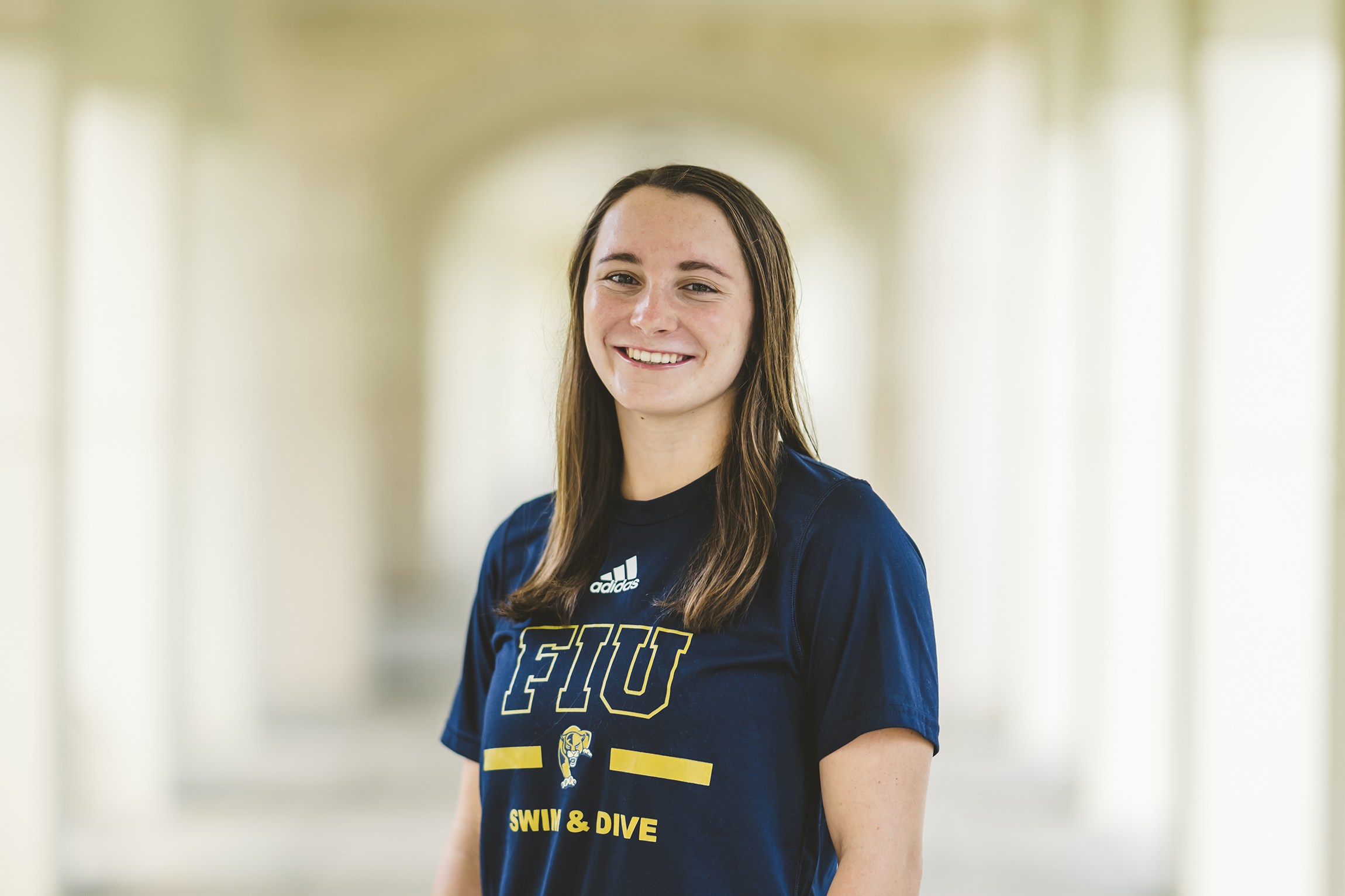 At FIU, Jordan Browning is maximizing her opportunities at FIU to turn sports into her passion, her community and her career.

Browning is on the women’s swimming and diving team at FIU, a team that's captured seven-straight Conference USA championships while posting a 3.61 team GPA last semester. A member of the Honors College, the freshman studies athletic administration. Her dream is to become an athletic director one day, and thanks to her experiences in college athletics combined with the mentors she has around her, she is setting up for a good shot at it.

Browning is immersing herself in what it means to be part of a team—from practicing in the pool to spending quality time with her teammates at the beach and at an acai shop in Wynwood. She is also learning the ins and outs of how college sports operate by talking with new Director of Athletics Scott Carr and Senior Associate Athletic Director Julie Berg.

Her Blue and Goals: “I definitely want to become the best student-athlete possible. I’d like to set myself up well for my future endeavors, whether that's in the pool or out of the pool. I hope to make connections that will help me throughout my life.” 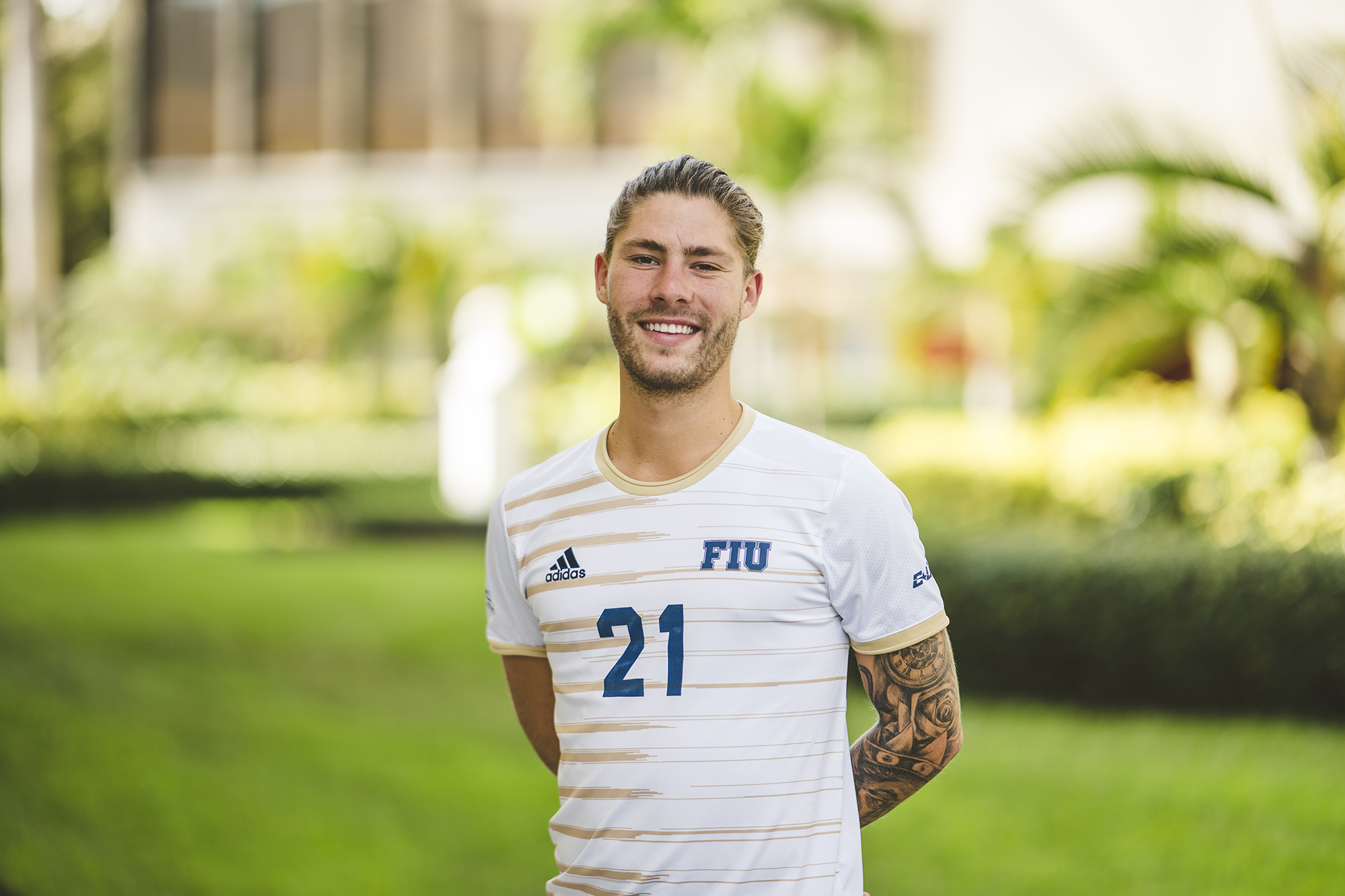 Julian Hodek came to FIU from Berlin, Germany, with one goal: get a top-notch education while playing for an excellent soccer team.

In his first year, Hodek is well on his way. The freshman is immersing himself in his studies and enjoying perspective-expanding conversations in his religious studies class, which he feels grows his knowledge of how other people think. He is also undertaking a fantastic career on the soccer field.

With Hodek as a team captain, the men’s soccer team defeated the No. 1-ranked team in the country last season, Marshall, to win the Conference USA Regular Season Championship. The liberal studies major also earned a spot on the conference all-freshman team at the end of the year.

His Blue and Goals: “I want to make friends and good connections all over the world. Of course, I want to work toward getting a good degree. And I want to do what I need to do on a daily basis to go pro after college.”

A lover of competition

Growing up, Lillian Garconnette watched the Food Network religiously. She was enthralled by the competitive aspect of shows like Cutthroat Kitchen and Chopped. It drove her to compete in cooking competitions in high school. Now, she’s hopping into the best of the hospitality industry herself.

Garconnette is a hospitality management major on scholarship from The Carnival Foundation, which awards up to $20,000 per year to select students with excellent GPAs from Florida high schools. She was encouraged to go to FIU by an alumnus who taught culinary arts at her high school.

The freshman loves being involved at Biscayne Bay Campus and is a regular at Wolfe Wednesdays, where the Wolfe University Center hosts monthly special activities such as Zumba classes and Halloween parties. Now, she’s getting ready to volunteer at something she’s always dreamed about: the South Beach Wine & Food Festival®; more than 1,200 FIU students volunteer each year. To date, the Festival has raised more than $31.8 million in support of its educational mission to cultivate the future leaders of the hospitality industry at FIU's Chaplin School of Hospitality & Tourism Management.

Her Blue and Goals: “One of the most important things to me is to do a study abroad program. I want to experience different cultures that I wouldn’t normally get to see, while simultaneously getting an education in the hospitality industry.”